Fuel cells run on hydrogen, the simplest element and most plentiful gas in the universe. Hydrogen is a diatomic element, meaning that in its liquid and solid states, hydrogen naturally forms into pairs of atoms, which is why hydrogen is often referred to as “H2”. Hydrogen is the lightest element, yet it has the highest energy content per unit weight of all fuels. Hydrogen’s energy density is 52,000 Btu/lb., which is three times greater than that of gasoline.

In nature, hydrogen is never found on its own; it is always combined into molecules with other elements, typically oxygen and carbon. Hydrogen can be extracted from virtually any hydrogen-containing compound, including both renewable and non-renewable resources. Regardless of the fuel source, fuel cells utilize hydrogen with little to no polluting emissions, making hydrogen the ultimate clean energy carrier.

Hydrogen gas is similar to natural gas in that it is lighter than air, so it rises and disperses quickly. Hydrogen is non-toxic and safe to breathe. Hydrogen is also odorless, colorless, and tasteless; since it cannot be odorized like natural gas, hydrogen detection and ventilation systems are employed. Like all fuels, hydrogen is flammable and must be handled properly.

In the U.S., hydrogen is transported safely through 700 miles of pipelines, and 70 million gallons of liquid hydrogen is transported annually by truck over U.S. highways without incident. Both indoor and outdoor hydrogen refueling stations are located in several dozen states and have safely dispensed compressed hydrogen for use in passenger vehicles, buses, trucks, forklifts, and other types of vehicles.

Hydrogen can be produced from a wide range of feedstocks, and any hydrogen-rich material can serve as a possible fuel source for fuel cells. Hydrocarbon fuels, novel feedstocks such as landfill gas, anaerobic digester gas, and biomass can also produce hydrogen, as can compounds containing no carbon, such as ammonia or borohydride. The vast majority of today’s hydrogen is produced via steam reformation of natural gas (95% in the U.S., roughly 48% globally), but alternative sources such as biogas are growing in popularity.

Hydrogen can be stored as either a liquid or a gas. To store hydrogen in liquid form, hydrogen must be cooled to -423 °F, requiring a tremendous amount of energy. Therefore, hydrogen produced in large quantities is usually pressurized as a gas then stored in caverns, gas fields, or mines before being piped to the consumer as natural gas is today. Researchers are examining an impressive array of storage options with support from the U.S. Department of Energy. 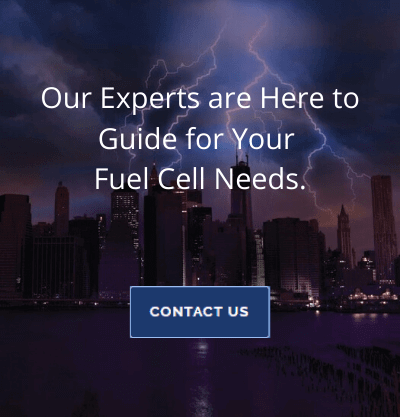